The choir’s recent joint Male Voice Choir Concert on Saturday the 3rd of October in St John’s Methodist Church Llandudno was a hugely successful event. Throughout the summer season male voice choir concerts are a regular feature on Tuesday and Thursday evenings at this venue. Cor Meibion Colwyn are proud of their connection with this fantastic venue and have performed here regularly for many years. This Saturday’s concert was somewhat different in that it was a  joint concert with an International feel where we are joined by the Vancouver Orpheus Male Choir from Canada. 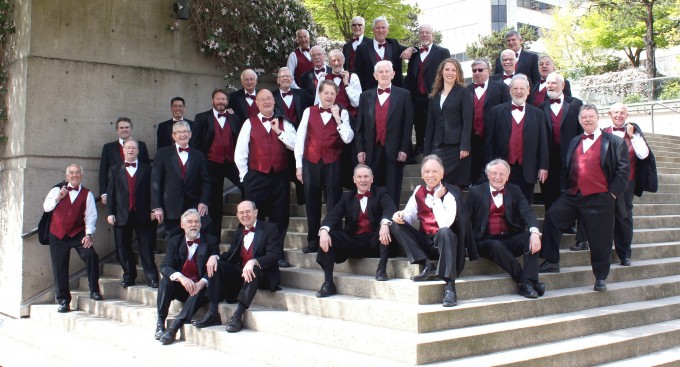 This concert was their penultimate date on their concert tour having been in South and Mid Wales this is their concert on the North Wales Coast. With such a distance between the choirs it was guaranteed that a varied and different program from each choir. Hailed for their eclectic repertoire and vocal joie de vivre, the Vancouver Orpheus Male Choir offered a mix of popular ballads, sacred and folk songs, Canadiana, rousing male voice classics and the occasional rock and roll. The combination mines the rich history of male choral standards and adds new and unexpected arrangements of contemporary works. “The joy they feel conveys itself to the hearts of the audience,” said one enthusiastic choral fan. Orpheus was formed in 1992 for “Men of all ages who love to sing.” Add to this four joint pieces where the choirs came together to break down the air miles between them.

Artistic Director: Liana Savard Liana has been an active director, educator and performer of music for over 20 years. Upon graduating with a Bachelor of Music degree in jazz studies from North Vancouver’s Capilano University in 2000, Liana went on to obtain her Master of Music degree in Choral Conducting from the University of Alberta in Edmonton in 2002. Liana joined the Vancouver Orpheus Male Choir as Artistic Director in 2005. She also runs a thriving vocal studio at the Langley Community Music School. Liana is a Member of the BC Choral Federation Board and Chairs the Adult Choirs Program for the Fraser-Coastal Region

Accompanist: Barry Yamanouchi  As accompanist for the Vancouver Orpheus Male Choir since 1994 Barry has been an integral part of the choir’s growth and musical development. He graduated with a Bachelor of Music from UBC and a Masters degree in music from McGill University with a major in sound recording Barry primarily works as an accompanist playing for many choirs which include the Coastal Sound Music Academy Chamber Choir, the North Shore Chorus, and the Vivaldi Chamber Choir. He is also a sought after accompanist for soloists and makes recordings in his home studio.   This spring Barry was awarded the Joyce O. Maguire award from the BCCF for long-term service as an accompanist.

The MC for the evening was Mr Dilwyn Price who always entertains in usual jovial and charismatic manner which engages the audience from the beginning to ensure that they enjoyed to concert to the full.